An area for every need.

Bofors Test Center has six permanent test sites. These sites have a well developed infrastructure, with roads and computer network.

All of our permanent test sites are fully equipped with bunkers for protection of personnel and equipment, thermal treatment chambers with a temperature range from -54°C to +76°C and target butts like stone walls and concrete bunkers.

The test sites Övre, Nedre and Roten have a maximum firing range of approximately 25 km for indirect firing and 600 m for direct firing.

Test site Björnen has a maximum firing range of approximately 25 km for indirect firing and 2000 m for direct firing.

The test sites Abborrtjärn and Lillen have maximum firing ranges of 500 m and 600 m respectively for direct firing. At Abborrtjärn we also have special Infrastructure like a 395 m long rail track, rocket motor test facilities and a test area for illumination charges. 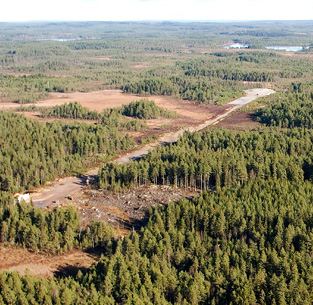